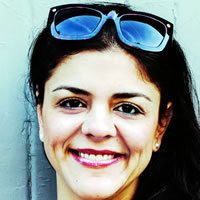 Sabrina Ghayour is a British-Iranian Chef, food writer and author.

Named as one of the ‘Rising Stars of 2014’ by The Observer newspaper, Sabrina is a self-taught cook and food writer who hosts the hugely popular ‘Sabrina’s Kitchen’ supper club in various venues across London, renowned for Persian and Middle Eastern flavourful dishes.

Her debut cook ‘Persiana – Recipes from the Middle East and beyond’ published in May 2014 has become a bestseller and received critical acclaim for its simple and colourful recipes and striking design and photography. ‘Persiana’ demystifies Persian and Middle Eastern cuisine, making it accessible and easy to recreate the colourful, flavoursome dishes of the Middle East, at home. Sunday Times’ Gizzi Erskine says “Sabrina Ghayour is a phenomenal Persian Chef” and Chef Raymond Blanc OBE says “Sabrina delivers Eastern promise in its delicious gastronomic form”. The Observer names Sabrina as “The Golden Girl of Persian Cookery”.

A seasoned cookery teacher, she regularly teaches Persian, Moroccan, Lebanese and Arabesque cookery classes at Divertimenti cookery school [4] as well as teaching and catering for both corporate and private clients. Sabrina specialises in cooking up colourful, moreish dishes with Eastern flavours in an abundant ‘Mezze’ style with unique recipes and techniques.

A celebration of the food and flavours from the regions near the Southern and Eastern shores of the Mediterranean Sea, with over 100 recipes for modern and accessible Middle Eastern dishes, including Lamb & Sour Cherry Meatballs; Chicken, Preserved Lemon & Olive Tagine; Blood Orange & Radicchio Salad; Persian Flatbread; and Spiced Carrot, Pistachio & Coconut Cake with Rosewater Cream.

From the golden girl of Middle Eastern cookery, Sirocco will bring tastes of the East to Western-style dishes in a collection of 100 delicious and accessible recipes. With an emphasis on simple ingredients and strong flavours, Ghayour will bring her modern inspirational touch to a variety of dishes ranging from classics and comfort food to spectacular salads and sweet treats.

Praise for Persiana:
‘Loving Persiana‘ – Nigella Lawson
‘A fantastic treasure trove of good food’ – Raymond Blanc
‘The most appetizing book – I want to eat every page of it’ – Pierre Koffmann